As the search for the missing Air Asia airliner entered a third day, there are reports of multiple items of debris spotted in the Java Sea which officials say they are “95% sure” came from the plane.

“My heart is filled with sadness for all the families involved in QZ 8501,” AirAsia CEO Tony Fernandes tweeted.

Speculation continues over what happened to the Airbus 320 and the role of adverse weather conditions at the time.

Meanwhile, another air drama unfolded on Monday as a Virgin Atlantic 747, VS43 to Las Vegas, was forced to turn back to London Gatwick following a landing gear issue, thankfully touching down safely.

One of the passengers shot video of the landing, while the immediacy of the spread of news events like this – that in a pre-social media world we might barely hear of – was illustrated by how news organizations were able to build stories from passenger tweets, and also by this picture by Hugh Whitfield, which was subsequently picked up by the Metro.

* POLITICS *  As the US Congress prepares to resume in the new year under Republican control, House speaker John Boehner is likely relieved that he won’t have to worry whether or not NY Rep Michael Grimm should serve following his guilty plea last week ago to tax evasion charges. The New York Daily News reported that the Staten Island congressman will announce his resignation tomorrow or Wednesday.

Now Boehner’s attention can turn to Louisiana Rep Steve Scalise, after it emerged at the weekend that Scalise had addressed a white supremacist group’s conference before being elected to congress.

On the Democratic side, former Sen Jim Webb of Virginia has been mentioned as a potential 2016 challenger to the seemingly unstoppable Hillary Clinton (who again topped Gallup’s list of most admired women) but a story tonight at Business Insider leaves Webb with some questions to answer about his use of PAC money.

One year into the De Blasio administration tensions between the New York Mayor and elements within the NYPD show little sign of easing. De Blasio’s address to a graduating class of recruits today drew some boos. He is set to meet with police unions tomorrow as the city prepares for the funeral of Officer Wenjian Liu on Sunday.

At the funeral of Officer Rafael Ramos this past weekend, Police Commissioner Bill Bratton – described by the New York Times as “an exemplary public servant and stout De Blasio ally – said:

* WORLD * The health worker who was diagnosed with Ebola after returning to Scotland from Sierra Leone is being transferred to a specialist unit in London.

After failing to agree on a continuation of economic austerity measures, Greece will hold a snap election next month which will have broad implications for the rest of the EuroZone. The election is set for January 25.

The Telegraph has a review of its world news stories of the year here.

* BUSINESS*  Shake Shack filed for an IPO which could value Restaurateur Danny Meyer’s burger chain at anything up to $1bn. Slate has some “tasty tidbits” from the filing, while Fortune serves up 7 things to know before biting.

The FT takes a look at some of the most significant disruptors over the past year. Also worth a read is the paper’s rundown of its top stories of 2014.

* SPORT * Black Monday marks the end of the NFL’s regular season with shake-ups in coaching and managerial positions across the league. One ongoing situation was resolved, however, the Detroit News reporting that Jim Harbaugh had signed a contract to take the reins at his alma mater, the University of Michigan, with the aim of reviving fortunes as its third head coach since 2008. The News reports that Harbaugh will be introduced at a press conference on Tuesday.

* MEDIA * Facebook apologized for what one user called the “algorithmic cruelty” in its year in review feature.

Tumblr CEO David Karp tells the BBC why it is the “most expressive social platform.” 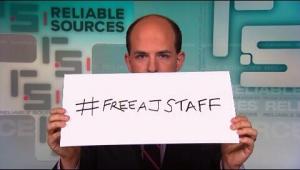 ABC Australia reports that Greste’s hopes of release now rest on an appeal to be heard on New Year’s Day.