As clocks at the Department of Homeland Security click closer to a  shutdown, the Republican-controlled House and Senate seemed no closer to  resolving their differences. With the Senate set to pass a “clean” funding bill on Friday morning, House Speaker John Boehner initially would not say whether he would back a bill that did not also defund President Obama’s executive action on immigration.

It was reported late on Thursday that the House was preparing to vote on a bill to extend funding for the Department for three weeks in order to avert a shutdown. But the National Journal reports that passing such a partial solution won’t be easy.

John Hudson at Foreign Policy writes on why the case against a shutdown ‘isn’t a slam dunk.’

To be sure, this week’s standoff stems from Republican opposition to President Barack Obama’s executive actions on immigration, but the fact that so many Republicans do not view the department as sacrosanct is making Secretary Johnson’s life dramatically harder. Skepticism about the department also highlights the continued debate over Bush’s legacy as his younger brother Jeb considers a presidential run. The creation of DHS was one of Bush’s signature accomplishments, but it has come under fire from libertarian-leaning Republicans in the House and Senate.

Such hijinks may well be smart—or dumb—politics, but they distract from a far more important and serious question: Why do we even have a Department of Homeland Security in the first place?

Talking of Jeb Bush, the former Florida Governor is due to address CPAC on Friday afternoon, seeking, via a Q&A with Fox host Sean Hannity, to dispel the view of some that he is a “squishy RINO”.

Some attendees aren’t prepared to even give him that chance, with an unknown number of activists preparing to walk out, presumably taking their tricorn hats and Gadsden flags with them.

The Fix’s Chris Cillizza has a memo for Scott Walker: “Islamic State does not equal Wisconsin protestors.” (Walker later, er, walked it back).

* WORLD * The ISIS terrorist known as “Jihadi John” was identified by several media outlets as a Kuwaiti-born Londoner. The Washington Post, which first reported the identification, looks at his background.

If the claims are true, Mr Emwazi would boast many of the attributes thought to characterise Westerners—including perhaps 600 Britons—who have gone to fight with IS. Few seem to be desperately poor nor do they necessarily demonstrate a failure to integrate into the societies around them.

FBI Director James Comey had said last year that US officials knew who the man in the ISIS videos was, but did not at the time give details.

Islamic State, meanwhile, released a video showing the destruction of ancient artifacts at the National Museum in the Iraqi city of Mosul. World heritage body Unesco said the attack “is far more than a cultural tragedy. This is also a security issue as it fuels sectarianism, violent extremism and conflict in Iraq.” 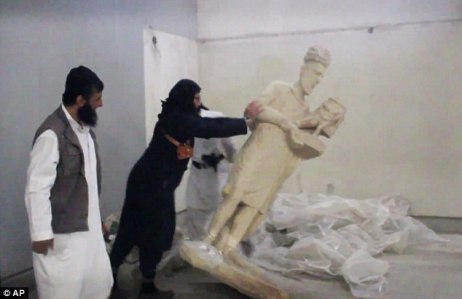 The German parliament is set to vote on Friday on whether to authorize the extension of Greece’s bailout loan. There were riots in Athens on Thursday night ahead of the vote – the first such demonstrations since the left-wing Syriza party came to power – as some leftists see the agreement as a backdown.

* BUSINESS * Apple will hold an event in San Francisco on March 9 where it will announce details of the Apple Watch, Bloomberg reported.

Up to the end, Kahn served as chairman of Kahn Brothers Group Inc., which was founded in 1978 and has about $1 billion under management. Kahn reportedly still went to his midtown Manhattan office three times a week, taking a short taxi ride from his Upper East Side apartment.

* MEDIA * The FCC approved rules on Net Neutrality, but the WSJ predicts an ongoing battle, with telecom and cable industries expected to challenge the 3-2 ruling. Robert McMillan writes at Wired on ‘How Google’s Silence Helped Net Neutrality Win’. The Christian Science Monitor wonders how much John Oliver had to do with Thursday’s decision (see yesterday’s Overnight Note).

Data from Britain’s National Readership Survey showed that the Daily Mail is the “most-read newspaper brand in the UK” counting both print and online audiences. The Sun remains the most-read title in print only.

After offices across the US apparently came to a standstill for an hour to watch this on Thursday – and Tweeted endlessly about it, even  shamelessly pushing various  brands – it might be time to remind people of the truth about these elegant, yet easily-disoriented creatures.

I would like to publicly apologize to Beck, I’m sorry Beck.

Ashley Clarke at The Guardian writes:

When questioned about his recent Beck-baiting conduct at the Grammys, West was unrepentant, and constructed an elaborate clock-based metaphor as his defence: “A broke clock is right twice a day, and the Grammys are so twice a day. What do you do those other times? If you had an assistant that could only give you the right time twice a day, at a certain point you’d want to fire that assistant. The Grammys are not the pinnacle, they’re an assistant. Us, as musicians, we’re the pinnacle. They’re an assistant, and they need to know what time it is.”