After Thursday’s 6-3 decision rejecting a legal challenge to the Affordable Care Act (see below) the Supreme Court could on Friday hand down another eagerly-awaited and politically significant decision, if it rules in Obergefell v Hodges et al, on same-sex marriage.

5 things you need to know about the Supreme Court's imminent decision on #marriageequality http://t.co/R76cHMSi1E

The @SCOTUSblog trolling of the idiots who think it's actually SCOTUS was epic today. Can't wait for the post-Obergefell round.

The US Supreme Court on Thursday upheld a critical part of the Affordable Care Act, affirming that subsidies to around 6.4 million people, allowing them to purchase healthcare plans, can continue.

Chief Justice John Roberts, in the 6-3 decision in King v Burwell, writes – in what Slate said “will go down as a lasting statement about judicial humility”  – 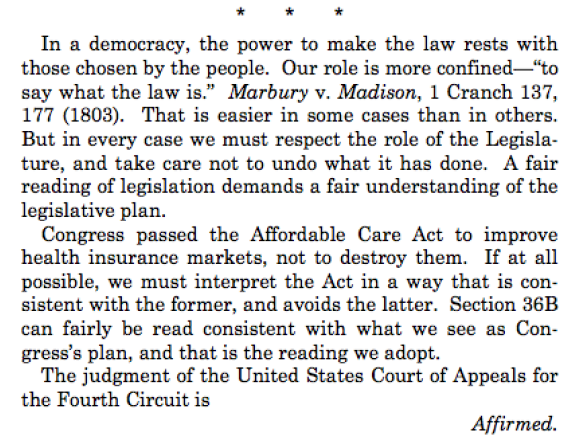 * The complete text of the ruling is here, via The Hill.

The Supreme Court’s Obamacare Decision Is The Biggest Possible Win For The Obama Administration http://t.co/B4wfjhlpEs

This wasn’t a win for Obamacare. It was a win for 6 million people who rely on Obamacare: http://t.co/mxJo9Wi269

Not everyone was celebrating, of course.

Here's how 2016 Republican presidential contenders reacted to the Obamacare decision http://t.co/cNhwqFEkin via @m_rhodan

In a closer decision (5-4) the Court also handed down an important civil rights decision on Thursday, upholding the law on housing discrimination, saying that it need not be intentional to be declared illegal.

* WORLD * South Carolina State Senator Clementa Pinckney will be laid to rest in Charleston on Friday. His funeral will be attended by President Obama, who will deliver the eulogy. The First Lady, Vice-President Biden and Hillary Clinton are also set to attend the ceremony, at the College of Charleston.

The first funerals for victims of last week’s shooting were held on Thursday.

US Secretary of State John Kerry is in Vienna as the nuclear talks with Iran approach their crucial final stage, but it appears that Tehran’s top negotiator will not be at the table.

Iran’s top nuke guy won’t be at the nuke talks, @michaelcrowley scoops. That is not good news for the talks. http://t.co/3BCBQUK1OD

The formal deadline for an agreement is next Tuesday, but the sides have indicated they are prepared to extend if a deal is close.

Russian President Vladimir Putin called President Obama on Thursday to talk about the Iran deal and the ongoing war in Syria. The New York Times reports that it was the first direct contact between the two leaders for four months.

Mr. Putin’s decision to call Mr. Obama and focus on Syria and Iran may reflect a desire to assert his continuing importance on the world stage despite Russia’s isolation and failure to break the Western consensus on [Ukraine] sanctions.

The United States is about to embark on a costly long-term effort to modernize its aging nuclear force, including weapons, submarines, bombers and ballistic missiles. Estimates of the cost have ranged from $355 billion over a decade to about $1 trillion over 30 years.

The situation in Greece remains deadlocked with no deal between Athens and its creditors, and talks set to resume on Saturday, with German Chancellor Angela Merkel warning that it was currently not possible to find fresh funds beyond what is left in the bailout program.

If history is any guide, Greek stock investors will have a long wait to make their money back http://t.co/iiYQXONdfB pic.twitter.com/pTQXNqagq5

* POLITICS * The Iran negotiations are the subject of the first significant “issue ad” of the campaign cycle by a group supporting Florida Sen Marco Rubio. Paul Blumenthal at Huffington Post reports:

The ad from the Conservative Solutions Project, a 501(c)(4) nonprofit that is not required to disclose its donors, says the Obama administration is pursuing a “bad deal” with Iran. The video features clips of both Rubio and Israeli Prime Minister Benjamin Netanyahu denouncing the international negotiations with Iran over its nuclear program. The group asks viewers to call their senators and to “join Rubio” in opposing the deal, which is supposed to be negotiated by June 30.

The potential deal was also a target for the GOP “front-runner”.

But the man who is currently running right behind Bush in the latest GOP poll apparently has a different focus, after Hispanic TV network Univision said it would drop the Miss USA pageant after his recent comments about Mexican immigrants.

Things are heating up. Donald Trump claims he will sue Univision for "hundreds of millions" over #MissUSA http://t.co/vXXLGgOML8

And in case you might have forgotten who’s actually running (and who might be just thinking about it), here’s the complete listing from the CNN/WMUR New Hampshire poll, showing the little-known Senator Undecided clearly the people’s choice.

After launching his campaign by awkwardly putting his children on hidden camera, Louisiana Gov Bobby Jindal – he of the asterisk above – had an interesting first day as an official candidate, prompting a hashtag in India and being called out by Buckwheat Zydeco.

You don't represent us, #BobbyJindal. Don't use our music. You've been a disaster for Louisiana. http://t.co/TdDjNje8sT

* BUSINESS/PHILANTHROPY * The Financial Times reports that Bill Gates is to “double his personal investment in green technologies” to $2bn over the next five years to “bend the curve” on climate change.

The foundation will focus on three core areas where Parker thinks real progress can be made: civic engagement, global public health and life sciences. When the foundation identifies a program that shows promise in one of these areas, rather than waiting for a grant application to roll in, it will dive right in and spend big on that program.

Sean Parker was once known as the Internet’s bad boy. @katiecouric finds out how he’s changed http://t.co/TntC7lvgP7 https://t.co/YiHGrqo4MZ

Finally, Courtney Love got caught up in a pretty nasty French taxi drivers’ protest over UberPOP. The French interior minister later declared the car-sharing service illegal. Thankfully she got out ok.

Courtney Love: always at the center of international news! (Hope she can still look for that Air Malaysia plane.) pic.twitter.com/alfi7KNdmY