In Charleston, South Carolina, President Obama delivered a remarkable, powerful, moving eulogy at the funeral of State Sen Clementa Pinckney, Pastor of the Mother Emanuel church, who was murdered alongside eight of his parishioners in last week’s shooting attack.

Addressing the need for change and the issues of racism and gun violence, the “Reverend President” said, in part:

Once the eulogies have been delivered, once the TV cameras move on, to go back to business as usual. That’s what we so often do to avoid uncomfortable truths about the prejudice that still infects our society.

To settle for symbolic gestures without following up with the hard work of more lasting change, that’s how we lose our way again. It would be a refutation of the forgiveness expressed by those families if we merely slipped into old habits whereby those who disagree with us are not merely wrong, but bad; where we shout instead of listen; where we barricade ourselves behind preconceived notions or well-practiced cynicism.

What is true in the south is true for America. Clem understood that justice grows out of recognition of ourselves in each other; that my liberty depends on you being free, too.

That — that history can’t be a sword to justify injustice or a shield against progress. It must be a manual for how to avoid repeating the mistakes of the past, how to break the cycle, a roadway toward a better world. He knew that the path of grace involves an open mind. But more importantly, an open heart.

A full transcript of the President’s address is here, via CQ RollCall.

"Quite possibly one of the most powerful & extraordinary moments I have witnessed." @donlemon on #Obama #AmazingGrace http://t.co/p8KowIanXP

Obama will be remembered for many things, of course. But that will be one of them. #AmazingGrace http://t.co/rVzkoMf9wb

Obama's Eulogy for Rev Pinckney is one of the greatest things I've ever seen. Amen.

This eulogy was the most important address of Obama's presidency. A message on Grace, Race, Tolerance, History and Understanding #Charleston

God Almighty. Poems written by Malana and Eliana Pinckney for their father. In the funeral program this morning. pic.twitter.com/CgGsE0il8U

(Friday was a remarkable news day. It was the first time I’d published three full Notes on the same day. Click on these subheads to see the separate posts from earlier on Friday) 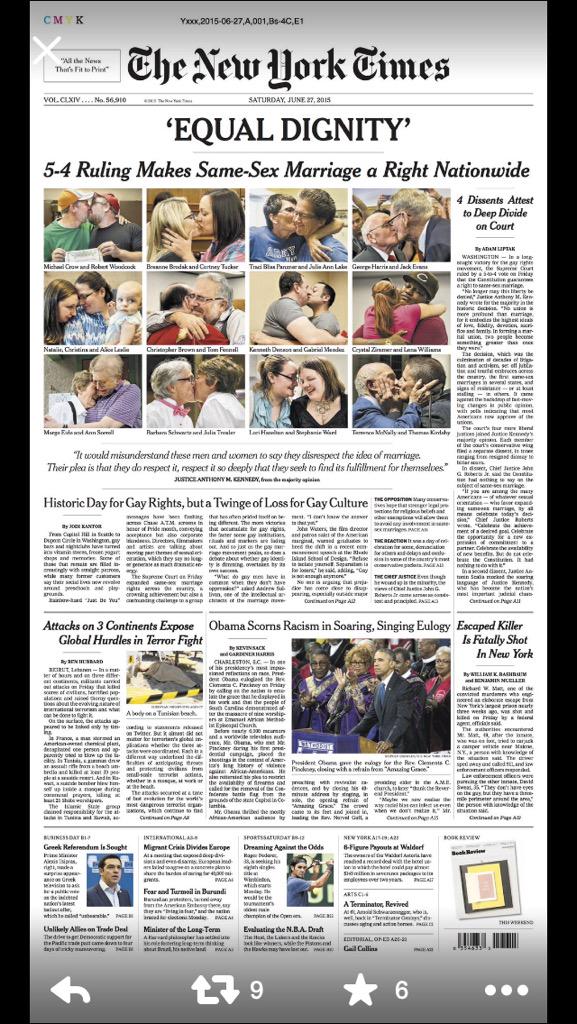 In one of its most socially significant decisions in recent years, the Supreme Court ruled 5-4 in favor of a national right to same-sex marriage.

At least 39 people – including British and German tourists – were killed in the Tunisian resort town of Sousse when gunmen opened fire on the beach adjoining a luxury hotel, the Tunisian interior ministry said. A further 36 people were wounded. Islamic State said it was behind the attack.

Elsewhere,  ISIS claimed responsibility for what is thought to be a suicide bombing at a Shiite muslim mosque in Kuwait City which killed 25 people. The BBC reports that a further 200 people were wounded. While in south-eastern France, one man was decapitated in an attack at an American-owned factory near Grenoble. A suspect is in custody and other arrests have been made, as the country’s security apparatus was put on high alert. 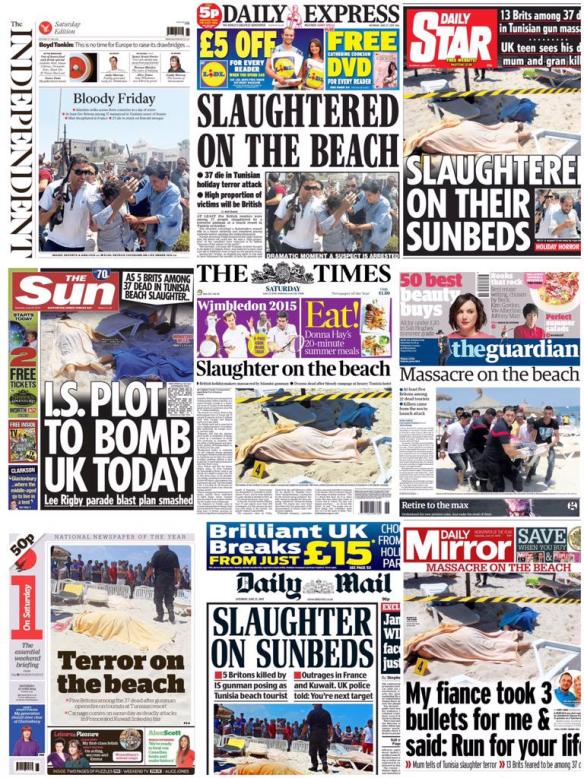 One of two escaped convicts from a correctional facility in upstate New York was reportedly shot and killed by a federal agent near the Canadian border, about 40 miles from the prison. Law enforcement and border patrol officers are still in search of the second man. The pair have been on the run for three weeks.

#Greece's Tsipras "personally committed to respect the result of your democratic choices, whatever those may be." http://t.co/7fpYbHVnBj

This is the leaked copy of final creditors' offer to #Greece. This may be the deal Greek voters are asked to vote on http://t.co/s06qInw833

A senior EU Comm official to me, via text: "I have no words. I am appalled. This is not a game. Probably the worst is yet to come." #Greece

But Bloomberg reports that if Athens misses its Tuesday deadline for payment to the IMF, “it might be worse for the lender than for Greece.”

There’s a difference between missing a payment to bond investors, and to an official institution such as the IMF. Under the fund’s policy, countries that miss payments are deemed to be in “arrears.” The Washington-based lender plans to stick to that language, rather than using the term “default,” IMF spokesman Gerry Rice said Thursday.