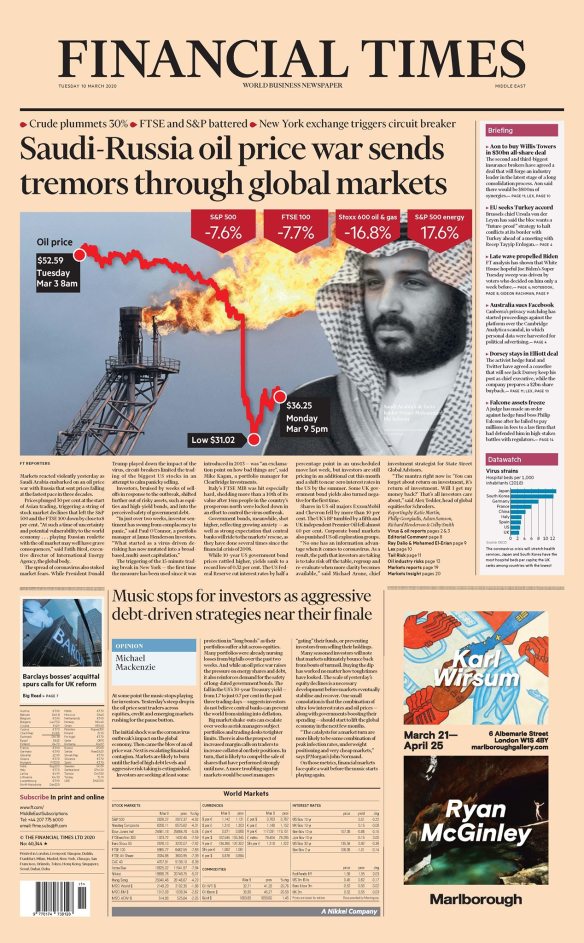 One lesson of the global financial crisis of 2008 was that the quality of a nation’s leaders and technocrats is quite important. We are now learning that lesson again. https://t.co/4eyVUSeVpX

It has been 20 years since Malcolm Gladwell popularized the epidemiological term “the tipping point” and people everywhere started applying it to all sorts of stuff that wasn’t epidemiology.

I have a feeling epidemiology is about to take it back.

OMG, Tucker is directly talking to the president and he’s talking Vvvvverrrryyyy slowly so that trump can understand. https://t.co/oD6cyKMx9r

14 days ago, Italy had fewer coronavirus cases than we do today. They employed similar public health measures to us. Now they have >7000 cases (366 deaths). Unless I'm missing something, this is us in a fortnight. Hopefully we won't wait that long before doing something more.

NEW: As the coronavirus crisis grows, Trump has zeroed in on its economic impact – and questions are being raised about the effect on his own properties https://t.co/RFAeJnpbZJ

"To those exhausted by the past three years of political upheaval and nastiness, he offers something even better: basic human decency," writes @SarahLongwell25 of Joe Biden https://t.co/uhWXtPVYnB

.@chrislhayes on CPAC: "One of the themes there was that coronavirus coverage was a hysterical plot by Democrats and the left and the fake news media to take down President Trump … There is only one reality, it is a reality where this is very serious."https://t.co/HaYE5bHPIf

China may be on the cusp of stopping domestic transmission of #Covid19. They reported only 19 new cases on March 9, & 17 deaths. But China is now importing cases from elsewhere so still at risk.
Totals there: 80754 cases, 3136 deaths & nearly 60,000 patients recovered. pic.twitter.com/fvIBiX4xeQ

A state visit by China’s president has already been postponed https://t.co/c8xRdL0PV8

What do you think, friends? Are you going to run out and get your own pair of 'Jesus Shoes'? pic.twitter.com/OTgZQdGaYF

Current panic buying is a small taste of what Brexit no deal 2.0 (or even a minimal deal) could bring. Very few people know the complex, hidden logistics of supply chains and regulation that deliver what they take for granted as 'just the way things are'.

They've had immunity from their policy of austerity, as they will have from their shitty Brexit. But now, after a decade of privileged Tories deliberately targeting the poorest and most vulnerable in society, this shitstain pleads with us to 'think of others.'

Opinion: Boris Johnson is prepared to forfeit your human rights to get his way with Brexit https://t.co/dbtPCUpBcG

Can we not just do that?https://t.co/RDSrBn8crg#BrexitShambles#BrexitReality

It is a “poor use of time” for a U.K. Government Minister to try to interfere with & bully an independent statutory body. Given the disaster that is #Brexit Gove should be giving all his attention to mitigating its effect on businesses & England’s failing public services. https://t.co/TrIcIeC9xU