Eyewitness accounts from across #Paris: "I saw my final hour unfurl before me" https://t.co/kkb7xFrpNE #Bataclan

More than 100 people have been killed tonight in what appears to be a co-ordinated series of attacks in several locations across Paris. Five terrorists are also reported to have been killed.

There were initial reports of explosions near the Stade de France, where the national football team were playing Germany, as well as a shooting at a restaurant. A hundred people are also thought to be held hostage at the Bataclan concert hall.

UPDATE 12.30AM: French police stormed the Bataclan concert hall and overpowered the attackers, but reports said as many as 100 people could have died inside.

President Francois Hollande declared a state of emergency, ordered the country’s borders closed and convened an emergency cabinet meeting. Hundreds of French troops were deployed on the streets of the capital. Residents were told to stay indoors and many people found themselves locked in restaurants and bars as they sought shelter. 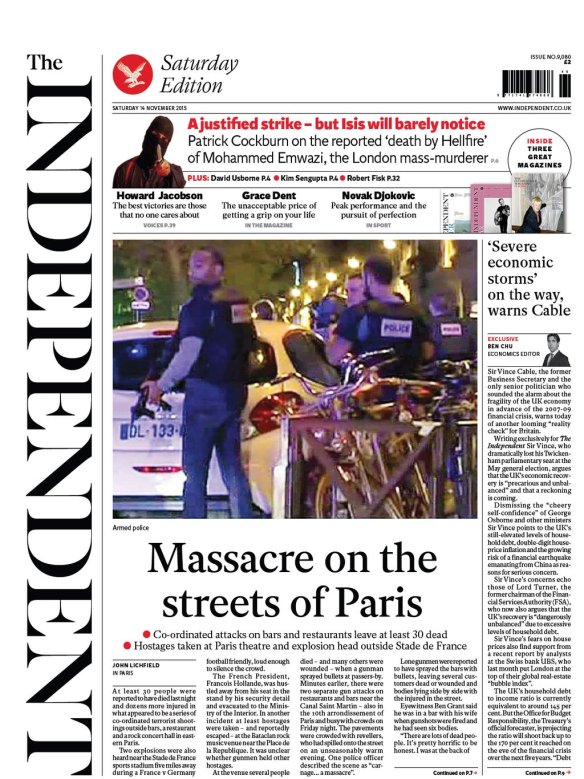 The French Military Has Been Deployed on the Streets of #Paris LIVESTREAM COVERAGE – https://t.co/GoU2LOnBew pic.twitter.com/EK2hyXLzjH

Glimpses from the streets of the Paris attacks https://t.co/0J1wJPlMY6 pic.twitter.com/nSlcHErfr5

President Obama on Paris: "An attack on all of humanity" https://t.co/J4EsLVWZvf pic.twitter.com/msyECQzYD8

#Paris update: Hollande visits concert hall. "We will lead the fight. It will be ruthless.” https://t.co/aHTJrMGxlp pic.twitter.com/fvA87XUVOR